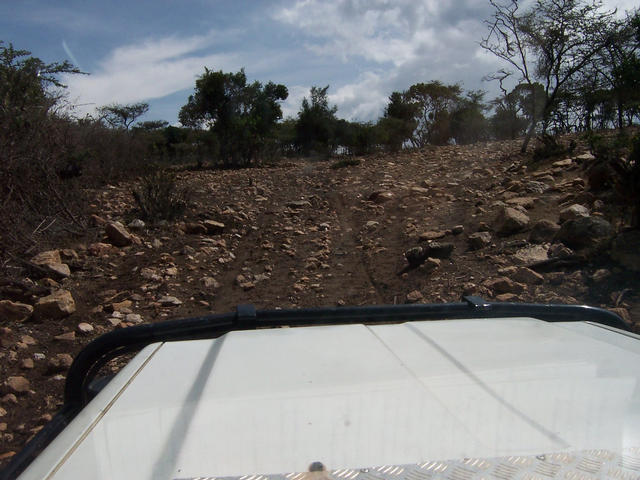 Driving to get into the bush to get to these isolated Maasai groups is slow going and tough - especially in the rainy season.  The airplane eliminates these barriers to the gospel and reduces travel time from 5 hours to 25 minutes by flying over this terrain.

Drought and the ensuing famine is awful.  As we drove through the bush we came across the Maasai man and boy standing next to this dying cow.  The cow would die for sure if they can't get it up on it's feet.  They need the cow to stay alive until the rains come but they themselves are too week to help the cow up.  We helped them get the cows to their feet in hopes that it would live until the rain came and the cows could become healthy enough provide them with nourishment again. 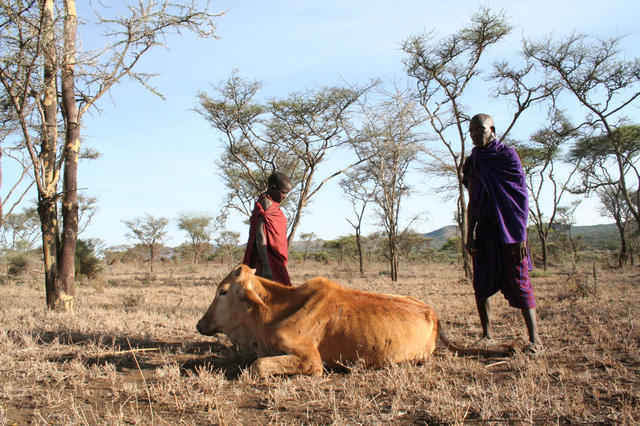 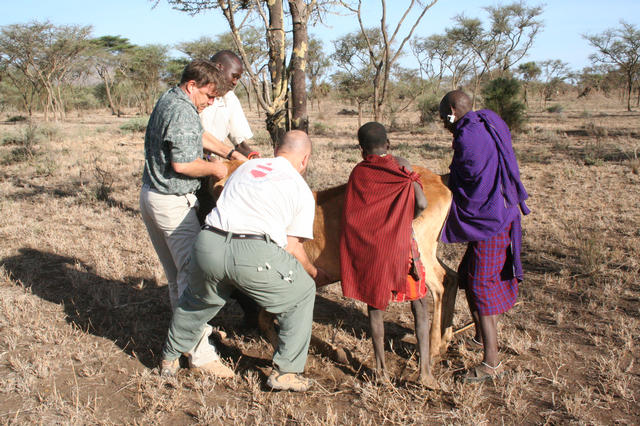 This was another of the many cows we saw lying on the ground too weak to get up.  This one had been left for dead.  We were on our way to take part in a prayer meeting with some Maasai believers to pray for rain.  Believing God was going to deliver these people from the drought and famine, we picked up the cows we found hoping God's coming rain would provide sustenance for the Maasai and they would not starve.

This Maasai village was dying.  The whole place reeked of death.  These next photos I took inside and around the village.  The people were nearly starved, there were dead cows littering the landscape, and the smell you can never forget - the smell of death and disease permeating the air.  This is a Maasai house under construction.  It is sticks tied together with grass and then walls are made by caking cow dung onto the sticks.  These are lived in until the termite eat them from the inside out and fall down. 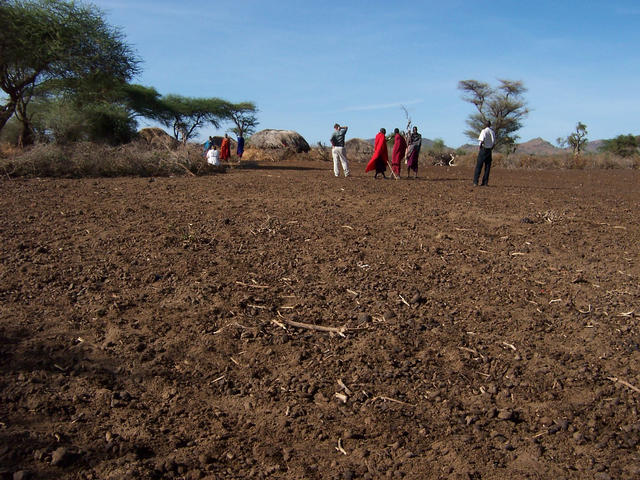 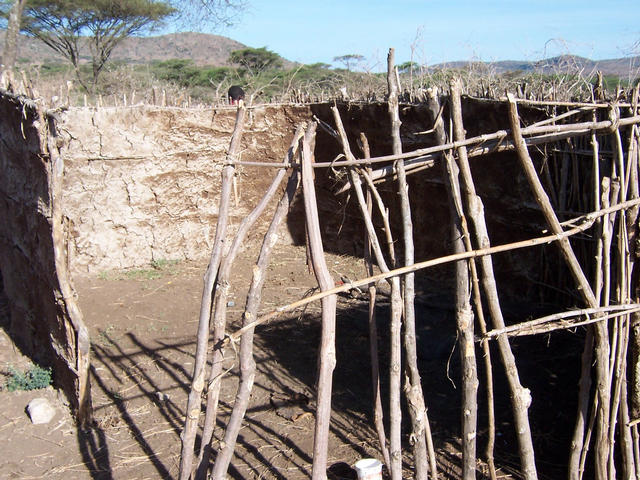 This cow was lying here kicking its legs literally on it's last breathe.  The Maasai worship the cow and will not kill it.  Once it's dead they use its skin though.  When we drove back out of the bush that afternoon this cow had been skinned leaving yet another rotting carcass. 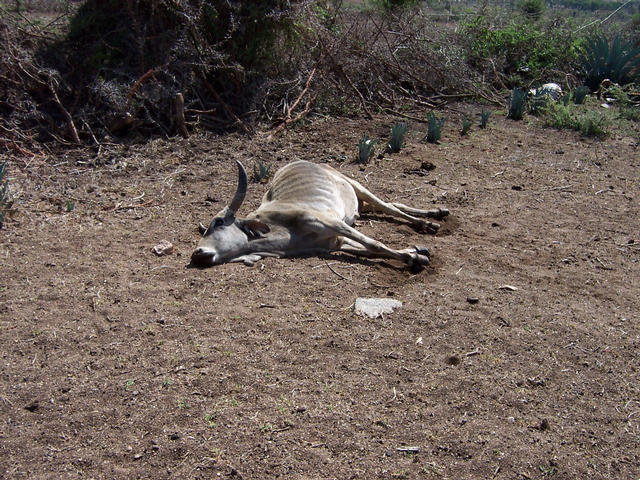 Dead cows cover the ground every where we go . . .
The carcassas rot in the hot African sun right outside their huts. 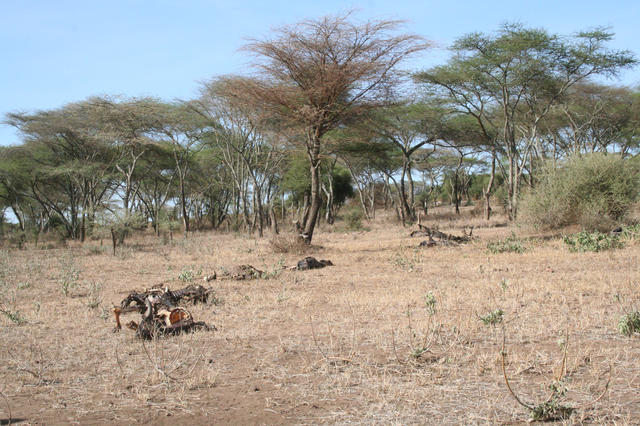 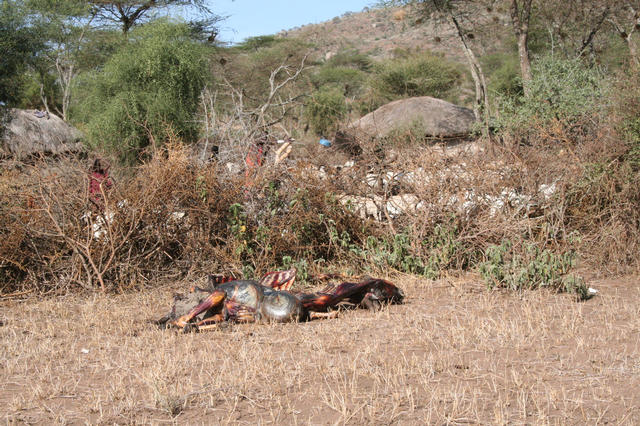 These Maasai women share with us about their situation
and in the background their Chief is approaching to talk to us. This particular chief has 4 wives. 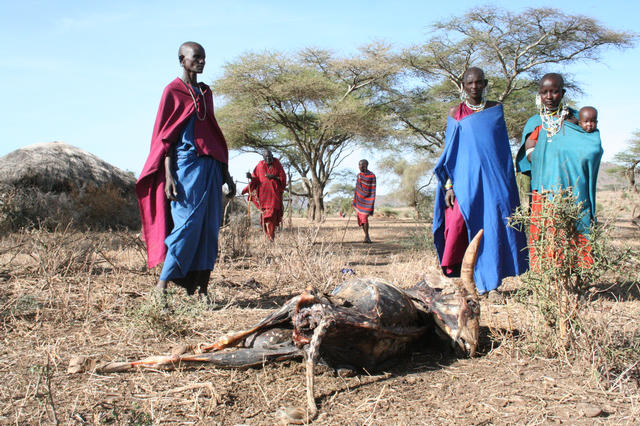 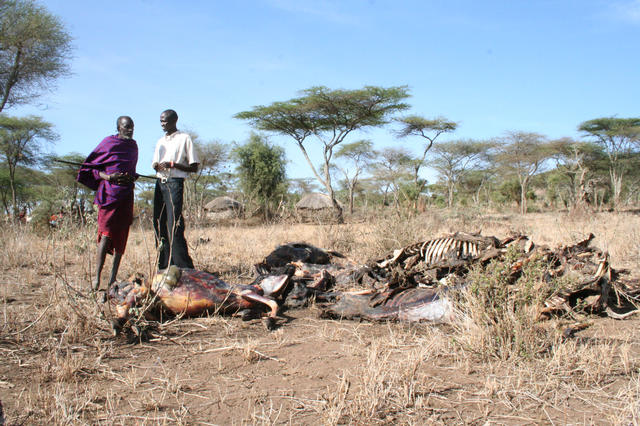 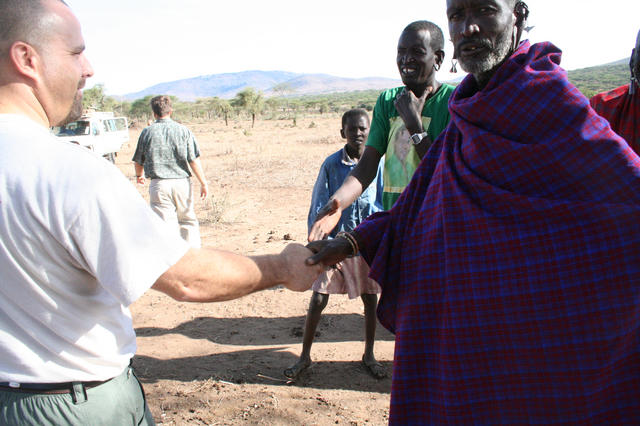 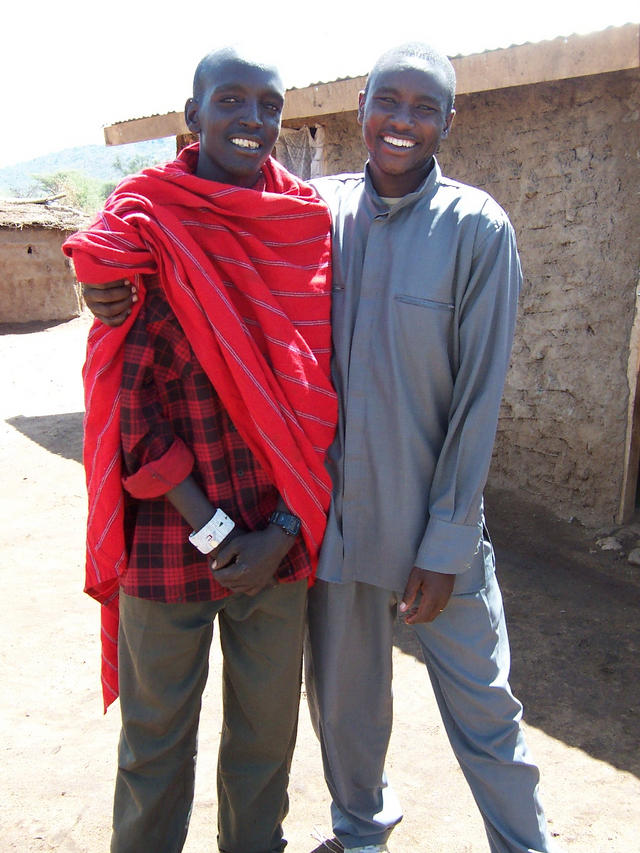 The picture oN the right is a Maasai Chief at another village we stopped at telling about how he had 300 cows die in the last few days.  Several Massai men have committed suicide by drinking the dip poison that they use on their arrow tips to kill game animals.  They killed themselves because they could not stand to see their beloved cows die.  They are decieved and it is killing them, externally.

These two guys are Joseph and Andrew who are Christians.  They live way out in the bush near the Metro Hills by the Kenyan border.  What a joy to see Christ in these guys!  on the right is Joseph.  He is an awesome preacher.  When we arrived he was told that I am a pilot who came to Africa for the purpose of bringing an airplane to minister the gospel to the people in these remote places.  He pulled me aside to show me a piece of his land tell me a story.  He told me that he started praying in February for God to send an airplane to help them   In faith, he took action by clearning a piece of his land and setting it apart for use as an airstrip.   I was blown away . . . one year after this acto fffo faith, here I was 9,000 miles from home in the middle of the Serengetti, hundreds of miles from anywhere, staring at an airstrip this brother made eventhough he has no money, no airplane, and no idea how God would do it.  I believe I am in this ministry as a direct result of the prayer of Joseph and others who I haven't even met yet who prayed with real faith that God would send out workers into their harvest field.  We in the American church have a lot to learn from our brothers and sisters our here.  It is our dream that we can one day help him learn to fly one of these airplanes to reach the surrounding tribes himself. 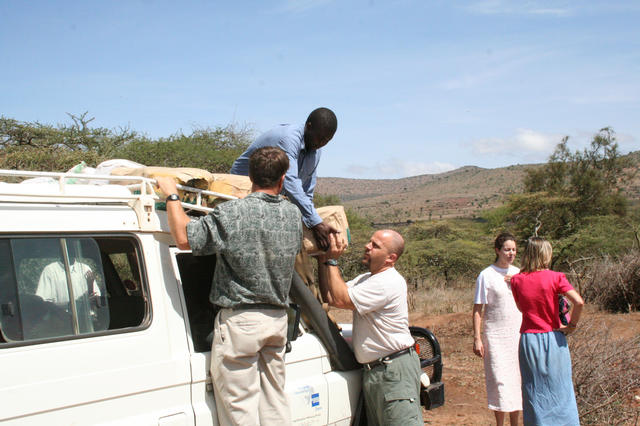 One of the things we do is to bring out maize and beans for the pastor to distribute.

It had not rained for over one year, not a drop.  About a month before this prayer meeting some Maasai witch doctors had made big deal about making a blood sacrifice trying to please the gods to bring rain.  Their gods provided nothing.  This is a picture of the prayer service held asking the Almighty God of heaven for rain.  The presence of God here is indescribable.  SEE THE VIDEO. The faith of these believes in the face of their circumstances is life changing. These believers told the witch doctors they were having a prayer service asking the True God for rain and invited them to come.  They declined.

It is hard to communicate the great work that airplanes play in meeting critical needs out here.  The man in the blue in the picture is James, the Pastor of this church.  He has had an illness for a long time that slowly takes over the body and now he has low energy making it hard to get around.   He got it from drinking bad cow milk.  He has been unable to get treatment because he can not get out of the bush to get his shots.  All he needs is a series of 15 shots but can not get them because of the remoteness of the area and his need to stay with his cows to try to keep them alive.  This is a simple treatment that can be accomplished in a 20 minute medical flight making rounds to the villages with the airplane. 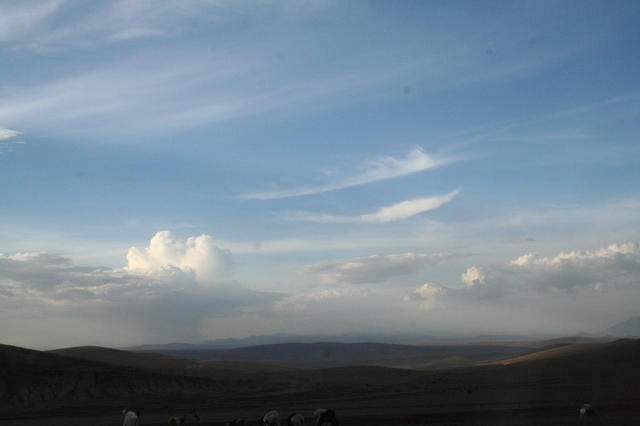 We took a picture of this cloud on the way out of the bush.  That one puffy cloud with rain under it on the left is over the valley where we had the prayer service.

We knew God had proven Himself as Jehova Jireh, The Provider.  After no rain for over one year, it rained on that village for the next 4 days straight.   He is a God who answers prayer.

If you can see the hat in the middle that is me getting mobbed by kids in Magugu.  These kids attend a Christian school that the Joshua Foundation started and trained the teachers for.  The kids are taught academics and the Word of God.  In a place of spiritual darkness and lack of education.  It is a joy to see them after they've come to know Jesus and get lit up with the knowledge and grace of God.  These will be the future leaders of Africa and will make a difference that only the Lord can bring through them.  These schools need frequent visits, training and oversight and are in remote places that are hard to get to frequently enough because driving is difficult and dangerous. 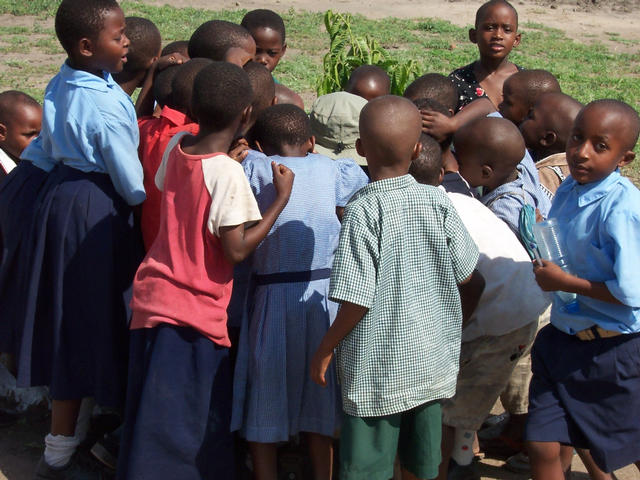 Thanks for visiting. . . God bless you!

"But you will receive power when the Holy Spirit comes on you; and you will be my witnesses in Jerusalem,  and in all Judea and Samaria, and to the ends of the earth"